"The Whiskey Priest": A dwarf with sad eyes, nearly limited knowledge, and a serious drinking problem. 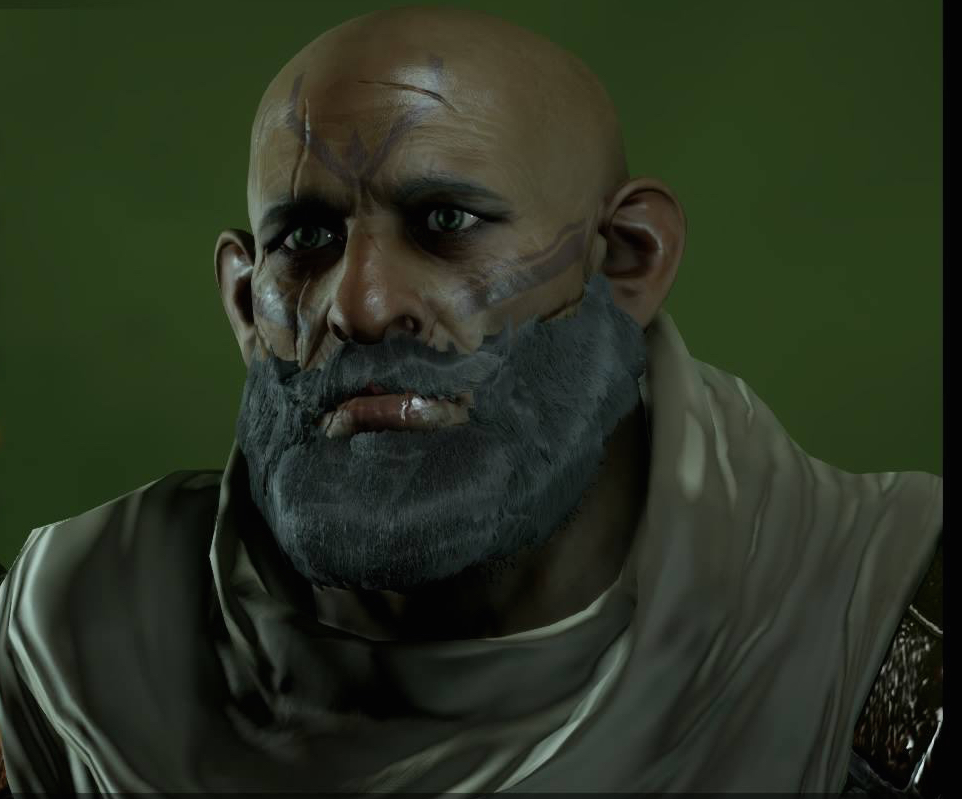 It is through this inter-race contact that Orsik’s parents— who both hail from the Underhome and were blacksmiths— came to be devoted to the veneration of Sardior, the Ruby Dragon God of both Knowledge and Trickery, whose followers seek to collect all the world’s knowledge for him. Sardior’s cult is on the rise. Until recently he’s been a relatively unknown God. Most people in Faerun may not have even heard of him, as until very recently he’s only been worshipped by a small set of Dragonborn. But his popularity is on the rise.

Orsik demonstrated a rebellious, anti-authoritarian streak that is quite rare for the no-nonsense and clan-devote Hill Dwarves, so his parents shipped him off to Pelevaran. Pelevaran is a ruined and abandoned ancient city that sits on the cliffs of the Great Rise in the Shining South. It also has recently become home to one of Faerun’s few temples to Sardior, and the acolytes there are gradually restoring the city.

Needless to say, as Sardior is the god of both knowledge and trickery, Orsik’s religious education did little to curb his rebellious, mischievous side. One day, as part of a prank gone spectacularly wrong, he accidentally set fire to the temple’s most prized possession: a library containing the collected wisdom and knowledge of the Sardior cult.

When asked to defend himself, Orsik impudently said that if Sardior was real, he would’ve stopped the library’s destruction. For this offense, and his spectacularly ill-advised attempt at religious independence, he was exiled.

Three days later, the Dragon God he refused to believe in appeared before him, enraged at the loss of his cult’s knowledge, and lifted him into the air, grasping Orsik’s face with his fearsome talons, marking him with what appears to be a tattoo (see attached image). Sardior informed Orsik that he was now cursed to wander Faerun. He must gather and record as much knowledge as possible from all over the world, and until then, if he begins to set down roots anywhere, he will be afflicted with nightmares.

This was 100 years ago. In that time, he has wandered Faerun, hiring himself out as an expert on antiquities and magical items for expeditions into ruins, serving as an advisor to a government or two, and generally tried to make enough money to live off of while putting himself in a position to gather knowledge. He also soon figured out that heavy drinking helped stave off the nightmares.

Early on, he had a lover, a Tiefling seer named Akta Domein. They made a good pair, as Faerun’s distrust of Tieflings, along with suspicion of those who can see the future, had made Akta a wanderer too. But Tieflings do not live long compared to dwarves, and she died 50 years ago of old age.

After Akta’s death, Orsik found that heavy drinking helped alleviate the sadness of his days too. Sardior still refused to lift the spell, but took a kind of pity on Orsik, giving him the “gift” of a flask which holds a celestial companion named Halalia for him. It’s a trickster’s kind of pity, and a trickster’s kind of gift, giving him a thing that will provide both comfort and an endless supply of the whisky that will inhibit his quest to end his curse. It’s a trickster’s gift in another way, too, as Halalia is herself cursed by Sardior to be trapped in the flask and trapped with Orsik.

Orsik travels on his mule, Mr. Tench, with Halalia in her bottle strapped to his belt. He also has a warhammer, given to him by Akta, named Remembrance. It has no special powers beyond sentimental value.

Ascendant campaigns can view previous versions of their pages, see what has changed (and who did it), and even restore old versions. It's like having a rewind button for your campaign.

We've already been saving your edits, so if you upgrade now you will have instant access to your previous versions. Plus, you get a 15-day free trial, so there's nothing to lose.

I'm sorry, but we no longer support this web browser. Please upgrade your browser or install Chrome or Firefox to enjoy the full functionality of this site.